A message from our Poetry Editor, Martha Silano 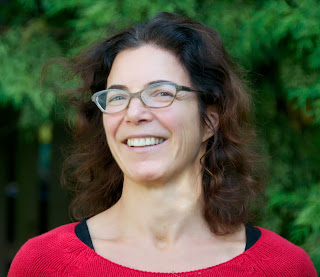 I am very honored and excited to serve as the incoming poetry editor for Crab Creek Review. My first encounter with the magazine came in the early 1990s when I moved from Portland to Seattle to enroll in the University of Washington’s MFA program, where I would study with David Wagoner, Heather McHugh, Linda Bierds, and Richard Kenney. I recall being immediately taken by this little magazine with a big heart, and it is with reverence and humility that I have accepted the task of choosing poems for the magazine beginning with those submitted for possible inclusion in the spring 2014 issue.

My mission as editor will sound familiar: I plan to select for publication the best work that comes across the transom. How do you define best, you might be asking. Originality, risk-taking and craft all both key; I’m looking for poems that aim high and exceed their expectations, that keep alive Pound’s dictum to make it new. When people ask me what kind of poems I enjoy, I often find myself quoting Wesley McNair. He states “Thought will not be possible in your poem unless you give the feet a place to stand, the hands something to touch, the eyes a world to see.” While I wouldn’t rule out entirely the possibility I might accept a poem providing no place for me to stand, nothing to touch or see, the odds are low.

McNair’s words on revision have stayed with me for the past fifteen years. They go like this: “If you have doubts about the poem you have written, the kind of doubts that make you want to ask a friend what he or she thinks, don't bother. Trust the doubts.” What does he mean by trusting the doubts? I think he means that the doubts indicate your poem’s not done yet. It means: either put your unfinished poem in a drawer for a few months, returning to it when you can look at it coldly, much the same way an editor would, or get cracking on reading each line aloud and listening for what’s missing, what could be said in a more interesting way, where you need to stretch the truth, where you need to tighten/cut.

I have read many poems that were wonderful until the final line. Endings are tough. My advice before sending your work off: take your time with those – don’t simply guess that your ending makes sense: ask others what they think: does it overstate, fizzle out, leave the reader scratching his or her head? There’s a je ne se qua quality to a successful poem. When I come across this Whoa-Wha?-How?!-wowness, I get all excited and have to share. Poems that have made me jazzy in that way of late have been Wendy Barker’s “Books, Bath Towels, and Beyond,” Roger Bonair-Agard’s “The All Black Penguin Speaks,” John Ashbery’s “The Instruction Manual,” and pretty much anything by Lucia Perillo, Denise Duhamel, Dorianne Laux, Bob Hicok, Dorothy Lasky, Susan Blackwell Ramsey, Campbell McGrath, and Mary Ruefle.

But don’t suspect that by naming names I would turn my back on a poem whose author I’ve never heard of, whose voice or style are unfamiliar or strange. One of the reasons I graciously accepted the position of poetry editor is for the sheer pleasure of finding chanterelles among the LBMs (little brown mushrooms, in mycologist-ese), tasty morsels of linguistic goodness in the forest floor otherwise known as the slush pile. As Robert Frost once said, “If it is a wild thing, it is a poem,” wild, I would add, not in the sense of uncrafted or sloppy, but as a made thing that reaches beyond normal or conventional bounds, that deviates from its intended or expected course.

While we are on the topic of voice and style, unfamiliar and strange, let me add that I am not out to publish a certain type of poem, with specific allegiances to narrative or modernist tendencies: I welcome the experimental, the avant-garde, and the conceptual, along with traditional modes of expression. I believe that each poem comes with its own set of rules, its own repair kit. It’s the poet’s job to figure out what the poem requires for its engine to purr.

Keeping all or some of this in mind, I encourage you to send along what you deem to be your most ambitious, polished, and passionate work.

Martha Silano is the author of four full-length collections of poetry, most recently The Little Office of the Immaculate Conception, winner of the Saturnalia Books Poetry Prize, and named a 2011 Noted Book by the Academy of American Poets, and Reckless Lovely, also from Saturnalia Books (2014). She has been a staff editor for Burnside Review and 42 Opus, and a poetry judge for several contests, including the 2013 Grayson Poetry Book Prize. Martha teaches composition and creative writing at Bellevue College.
Posted by Crab Creek Review at 10:15:00 PM

I am very excited for you. I wish you many poems you can love and rest for your eyes when you need it.

I'll also say that I enjoy reading more of your background as a writer in this post.